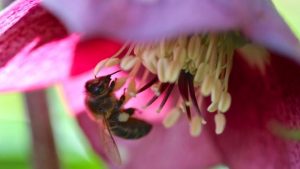 It may seem an odd fit to talk about polystyrene and bees in the same sentence. And yet, across Europe the vast majority of hives now sold are made from the substance of polystyrene, supporting thousands of colonies and millions of these valuable insects, which support the world and keep humanity alive.

Why polystyrene for bees?

Well, just think about weight for a start. Traditionally, hives are made of cedar wood, which is great as a sturdy assembly, but what happens when it comes to moving or storing these structures? They are heavy and unmanageable (remember that many beekeepers have several hives) and make for backbreaking work. Polystyrene removes the unwieldy element due to its lightweight composition, while maintaining all the home comforts for our black and yellow friends.

And there we move to another key benefit – warmth. Many wooden beehives only offer a thin barrier between themselves and an often chilly outside world. Wooden hives may seem natural but they rarely mimic the thickness of a bee’s natural home, such as a tree trunk.

Insulation is vital, and polystyrene offers it in abundance. In fact, because of this insulation, bees in polystyrene hives often have a longer season, emerging up to a month sooner than other broods – and from a larger nest.

What’s the cost of a polystyrene beehive?

Generally, a polystyrene hive is about half the price of a wooden hive, and has the potential to last a lot longer in what can be testing outdoor conditions.

Polystyrene hives do not rot or need slathering in preservative making the dampness that so often can be the downfall of bees, repelled. Made of toughened polystyrene, the hives can be expected to last upwards of 30 years. Do not fear they’ll blow over in the wind because polystyrene hives come with straps to tether them down, making them just as secure in any weather.

What’s the environmental cost of a polystyrene beehive?

Polystyrene is recyclable and, with a long life, exists as a sustainable substance in its own right. No-one knowingly wishes to damage the environment and polystyrene is a friend of the bee, not the enemy.

But aren’t they ugly?

Far from it. Polystyrene hives are designed to be easy on the eye. In fact, from a distance, it’s hard to tell the difference. Polystyrene hives can also be painted to fit in with their surroundings whether a city rooftop dwelling or at one with countryside nature.

Like the bees, you’ll never know the difference. Just look at the evidence here.

We hope this short article has made for an interesting five minute read.
Please stay tuned for more surprising uses of polystyrene.
Meanwhile, for all your polystyrene queries and needs, contact us here.